Display Supply Chain Consultants (DSCC) has published Q4’17 OLED shipment, revenue and market share results. As expected, OLEDs had a record quarter in Q4’17 on a significant jump in panel shipments for the Apple iPhone X and for OLED TV panels during the holiday season. As shown in Figure 1, OLED panel revenues rose 62% Q/Q and 120% Y/Y in Q4’17 to a record $8.8B. For 2017, OLED revenues grow 57% to $23.2B.

The report also tracks shipments and share by customer. Samsung was the leading OLED brand in 2017 with a 47% share on over $10B in OLED panel procurement. Apple was second with a 29% share. In Q4’17, Apple led with a 52% share with Samsung at 30% due to the iPhone X ramp. LG was the #3 brand with a 5% share. Apple is expected to lead in 2018 as well followed by Samsung and LG.

This report also tracks fab utilization and does show a significant drop at Samsung Display due to over-reliance on a single model from a single customer who is unlikely to lower prices due to significant pricing power. While OLED revenues are currently forecasted to drop 29% Q/Q to $6.3B, it will still represent a 48% Y/Y increase. In addition, in Q3’18 OLEDs are expected to establish a new record high as OLED penetration increases into new smartphones as OLED prices fall. DSCC’s Quarterly OLED Shipment and Fab Utilization Report tracks monthly OLED and LTPS LCD fab utilization and forecasts OLED shipments by application, form factor, size, resolution, panel supplier and customer through 2022. For more information, please contact Dustin at dustin@displaysupplychain.com and (832) 451-4909. 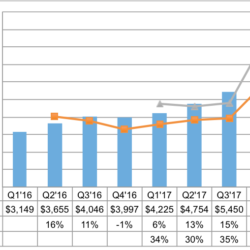 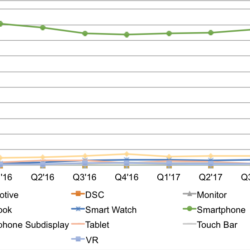 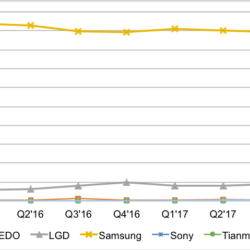 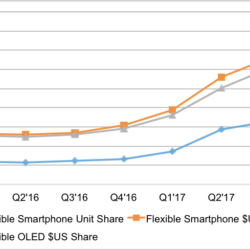 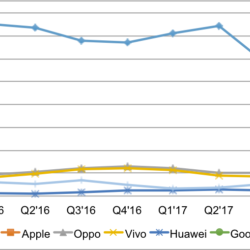