Strong growth in TV units as well as 98 percent year-over-year growth in OLED TV area powered the OLED panel market in the first half of 2018 to 30 percent year-over-year, according to the latest Display Supply Chain Consultants (DSCC) Quarterly OLED Shipment and Fab Utilization Report. Meanwhile, smartphone panel growth paused as the industry absorbed excess inventory built in 2017. OLED smartphone panel growth will resume in the second half of the year with 47 percent area growth forecast for the last six months of the year in this segment.

The report covers OLED shipments for 11 applications, eight panel makers, and screen sizes up to 77 inches. The latest release added a two-quarter forecast in the history version with an additional four quarters and four years in the forecast version. The report also covers OLED fab utilization by month for all OLED fabs in mass production and a two-month fab utilization forecast. Furthermore, the report shows expanded detail of smartphone panel shipments by brand and model as well as 32 separate smartphones with panels supplied by Samsung Display.

“OLED smartphone panel shipments will surge in the second half of the year with new model introductions by all of the leading brands,” said Yoshio Tamura, Co-Founder and President of Asian Operations at DSCC. “To recognize the importance of this critical sector, we’ve expanded the coverage of the Quarterly OLED Shipment and Fab Utilization Report to capture more sizes and models. This will enable our clients to perform even more detailed analysis on the market.”

OLED panel revenues increased 14 percent year-over-year with OLED TV panel revenue up an impressive 80 percent year-over-year as unit shipments surpassed modest price declines. Samsung continued to lead all panel makers with 86 percent of OLED panel shipment revenues, but this represents a decline from 91 percent in the first half of 2017 as LGD shipments of both TVs and smartphones have increased. In addition, increased shipments from Chinese panel makers BOE, EDO, Tianma, and Visionox have allowed these companies to gain a foothold in the market.

The DSCC Quarterly OLED Shipment and Fab Utilization Report is the display industry's most comprehensive OLED shipment and fab report covering smartphone, other mobile, and TV panel markets. For more information about the report, please contact Gerry McGinley at 770-503-6318, e-mail gerry@displaysupplychain.com, or contact your regional DSCC office in China, Japan or Korea. 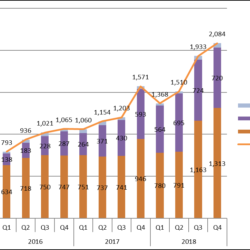