Display Supply Chain Consultants (DSCC) is pleased to announce the latest issue of its Quarterly OLED Shipment and Fab Utilization Report detailing the industry slowdown in Q1 2018 and with a forecast for a robust recovery throughout the rest of the year and a revised forecast out to 2022. The report covers units, revenues and ASPs for eleven different applications of OLED panels, plus supply chain relationships for phones and TVs and fab utilization figures for OLED and LTPS LCD fabs.

On a unit shipment basis, OLED panels were down 20% Q/Q in Q1 and down 3% Y/Y as shipments for OLED phone panels decreased as shown in Figure 2. Despite the drop in smartphone units, the smartphone application continued to represent the large majority of OLED panel unit shipments, with 92% of all OLED panels, followed by Smart Watch with 5%. The report tracks shipments across 11 different applications.

By application, on a revenue basis in Q1’18, smartphones represented 88% of panel revenues, while OLED TVs represented 7% and Smart Watch came in #3 with 2.3%. Samsung led all panel suppliers in revenue with 89% share, followed by LGD at 9.5%. Third-place supplier Visionox captured only 0.7% of OLED revenues but showed impressive Y/Y growth of 425%.

The report also tracks shipments and share by major brand for smartphones and TVs. In smartphone, Samsung surpassed Apple in Q1’18 to take the #1 spot for OLED revenues due to Apple order cut. These two top brands consumed 79% of OLED panels by revenue in Q1’18.

Average selling prices (ASPs) for OLED smartphone panels declined in Q1 as SDC dropped the prices for rigid smartphones aggressively to win business at Chinese handset makers and compete with LTPS LCD. SDC is maintaining high prices for flexible OLED panels, which inhibits demand but maintains high margins, while other panel suppliers are too small to influence price, therefore we expect flexible price to decline gradually during H2’18.

Across all applications, flexible panels declined to 40.8% unit share in Q1’18 on a 36% Q/Q decrease. Flexible revenue declined 41% Q/Q, and revenue share declined to 65% from 74% in Q4. We estimate flexible units will rebound in Q3’18, up 95% Q/Q, and will reach a 49% unit share by Q4’18, mainly from high end models from tier 1 brands.
​
For the longer term, we see OLED phone panel shipments increasing continuously on an annual basis while LCD smartphone panel shipments decline, as shown in Figure 3. We now expect that total OLED phone panel shipments (including rigid, flexible, and foldable form factors) will surpass LCD in 2021.

For the long term forecast, OLED panel revenues will continue to increase at double-digit growth rates, with peak growth in 2020 of 32%, and will increase to $57.2 billion in 2022.

Smartphones will remain the dominant application for OLED panels throughout the forecast period; we forecast that smartphones will be 91% of unit shipments and 79% of revenues in 2022. Smartwatch will continue to be the #2 application in units, while TV will continue to be the #2 application in revenue. TV panel revenues will increase to $6.2 billion in 2022 or 11% of all OLED on 13M OLED TV panel unit shipments. 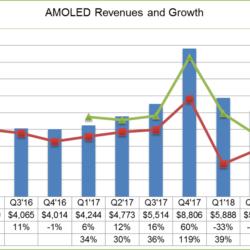 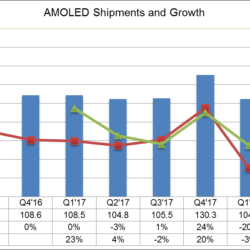 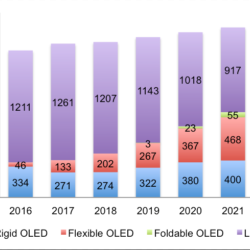 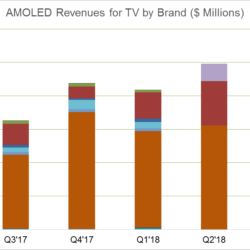