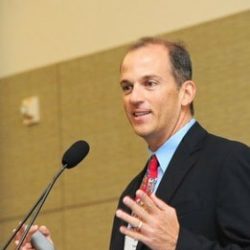 Ross will examine how examine how COVID-19 has impacted the display market and how the outlook for display revenues has changed over the next few years by application. Interestingly, Ross sees the display market outlook improved post-COVID compared to pre-COVID as WFH and LFH boost the slowest growing markets (tablets, notebooks and monitors) at a time when LCD capacity is shrinking, increasing prices and margins. He will also look at lessons from previous downturns and why this downturn is different as the pandemic has shown that we need our displays, like the internet, more than ever. He will also answer key questions related to capex, LCD vs. OLED revenues, LCD vs. OLED smartphone shipments, rigid vs. flexible OLED volumes, OLED shipments by panel supplier and where Chinese suppliers are gaining share as well as major developments expected over the next 12-24 months that could shake-up the display industry.

Ross Young is the founder and CEO of DSCC. Previously, Young served as SVP of Displays, LEDs, Lighting and PV at IMS Research after the firm acquired his market research business Young Market Research (YMR). Prior to YMR, he was VP of New Market Creation at Samsung LCD.

From 1996 to 2008, Young started, ran and sold DisplaySearch, the leading source of market intelligence, events and consulting to the flat panel display supply chain. With less than $500 in capital, he grew the company to over $10M in revenues during his tenure. Young launched most of the market categories for the company, including FPD equipment, FPD materials, TFT LCD shipments and technology, notebook PCs, desktop monitors, TVs and sell-through. He also launched the US events business, which included broadcasting the company's HDTV Conference on HDNet. In addition, Young led DisplaySearch's global consulting business.

Prior to DisplaySearch, Young served in senior marketing positions at OWL Displays, Brooks Automation, Fusion Semiconductor and GCA in the driver IC, flat panel automation, etch and strip and lithography markets. At GCA, Young was named to the VLSI Research Executive All Star team for his attempts to help save the company, which had received extensive support from SEMATECH.

Young has made multiple TV appearances as a display industry expert, including NBC's The Today Show. He has been an invited speaker at numerous conferences worldwide, often keynoting. He has also been quoted in most major business and video publications including Business Week, Forbes, Fortune, The New York Times, USA Today and the Wall Street Journal. He received a Presidential Citation Award from the Society for Information Display (SID) in 2012 for "sustained service in promoting the Market Focus Conference Series from concept to successful completion."

Young has a BA in Economics and a Minor in Japan Studies from the University of California at San Diego (UCSD) with a year at Australia's University of New South Wales. At the graduate level, he completed UCSD's Graduate School of International Relations and Pacific Studies program with an emphasis on International Management and Japanese. He also studied at the graduate level for nearly two years at Japan's Tohoku University on a Ministry of Education fellowship where he completed research on the relationships between Japanese semiconductor and semiconductor equipment materials suppliers. This led to the publication of his book Silicon Sumo: US-Japan Competition and Industrial Policy in the Semiconductor Equipment Industry published by the University of Texas.