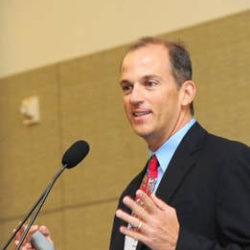 COVID-19 accelerated a number of key trends which benefited the display industry. Demand has surged as students and workers communicate more than ever through their displays at home rather in person leading to strong growth in notebook, monitor and tablet demand. In addition, funds that may have been spent on travel and leisure are being reallocated to purchases of bigger and better TVs and other display products. COVID-19 has likely pulled forward significant demand and has led to strong unit growth, tighter supply, higher prices, higher profits and upgraded capex and capacity. It has also accelerated interest in emerging technologies which can improve display performance and disrupt the existing display supply chain. Of critical importance is how long these trends are expected to last and whether prices will fall as fast as they have risen. Is the display industry poised for a downturn or will the good times continue to roll?

This talk will quantify the latest forecasts for the display industry including units, revenues and area by application. It will also examine where prices, costs and margins are likely headed in the rest of 2021 as well as 2022 – 2025. It will also try to identify which segments and companies are best positioned for success. Our thesis is that times have never been better for the display industry. The desire for companies to shut down significant LCD capacity once prices start to fall and convert to potentially higher margin OLEDs and other technologies will minimize the downturn. In addition, the emergence of miniLEDs will boost LCD ASPs for a growing number of products from tablets to TVs which should boost the revenue outlook for LCD suppliers and make for some very interesting competition with OLEDs in numerous segments. It is a great time to be in the display industry.

This talk will examine the market outlook for smartphone displays. It will cover the latest outlook for shipments and revenues by panel supplier and brand by:

It will also examine the latest product and technology roadmaps from Apple, Samsung and other brands. In addition, it will examine the key technical and supply chain challenges that need to be overcome to significantly boost foldable and rollable volumes. Other display technology advances under development will also be explored.

Ross Young is the founder and CEO of DSCC. Previously, Young served as SVP of Displays, LEDs, Lighting and PV at IMS Research after the firm acquired his market research business Young Market Research (YMR). Prior to YMR, Ross was a VP in GE's TV business and was VP of New Market Creation at Samsung LCD. From 1996 to 2008, Young started, ran and sold DisplaySearch, the leading source of market intelligence, events and consulting to the flat panel display supply chain. With less than $500 in capital, he grew the company to over $10M in revenues during his tenure. Young launched most of the market categories for the company, including FPD equipment, FPD materials, TFT LCD shipments and technology, notebook PCs, desktop monitors, TVs and sell-through. He also launched the US events business, which included broadcasting the company's HDTV Conference on HDNet. In addition, Young led DisplaySearch's global consulting business.

Prior to DisplaySearch, Young served in senior marketing positions at OWL Displays, Brooks Automation, Fusion Semiconductor and GCA in the driver IC, flat panel automation, etch and strip and lithography markets. At GCA, Young was named to the VLSI Research Executive All Star team for his attempts to help save the company, which had received extensive support from SEMATECH.

Young has a BA in Economics and a Minor in Japan Studies from the University of California at San Diego (UCSD) with a year at Australia's University of New South Wales. At the graduate level, he completed UCSD's Graduate School of International Relations and Pacific Studies program with an emphasis on International Management and Japanese. He also studied at the graduate level for nearly two years at Japan's Tohoku University on a Ministry of Education fellowship where he completed research on the relationships between Japanese semiconductor and semiconductor equipment materials suppliers. This led to the publication of his book Silicon Sumo: US-Japan Competition and Industrial Policy in the Semiconductor Equipment Industry published by the University of Texas.